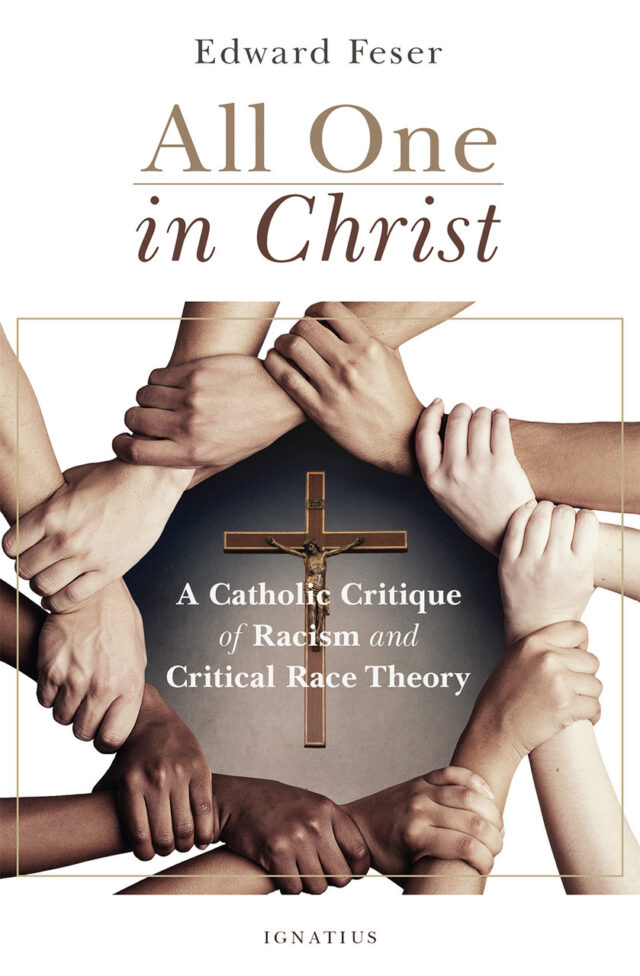 This is not so much a review as it is a series of initial thoughts on Edward Feser’s new book, All One in Christ: A Catholic Critique of Racism and Critical Race Theory (Ignatius 2022) (AOIC). At a mere 147 half-sized pages, this brief work attempts to restate the Catholic Church’s position against racism (and by extension chattel slavery) while also laying waste to Critical Race Theory (CRT). Feser spends more time on the latter than the former. Why? Because though Feser is correct to identify logical difficulties with certain popular presentations of CRT, most of what he says has already been hashed out before, his intended audience is undoubtedly less concerned with racism than being accused by CRT of being racists themselves. Moreover, AOIC does not read like a work intended to save misguided Catholics from embracing CRT. Rather, its CRT-related chapters come across as little more than preaching to the choir, with the “choir” being the typical Ignatius Press audience of conservative white American Catholics who typically vote Republican and support neoliberal (if not libertarian) socio-economic policies.

Feser might quickly accuse me as he accuses certain espousers of CRT of engaging in ad hominem attacks rather than engaging in a fair intellectual discussion. Ok. However, before getting there, let me say that AOIC’s first two chapters—“Church Teaching Against Racism” and “Late Scholastics and Early Modern Popes Against Slavery”—are excellent. The third, “The Rights and Duties of Nations and Immigrants,” is inoffensive insofar as it makes a number of commonsense claims backed up by papal opinions on the exercise of prudence when it comes to national immigration policy. One glaring difficulty with this chapter, one that returns several more times during the course of the book, is that Feser assumes the countries like the United States are coherent, monolithic nations with an identifiably unified socio-political culture that needs special care and protection from alien influences. Feser ignores, in the American context at least, the extent to which anti-immigration positions are backed by narrow conceptions of what it is to be “an American” that are not shared by the whole of the American population.

Turning to CRT, or in truth a small handful of popular presentations of CRT, Feser detects the vile specters of postmodernism and Marxism lurking behind it. And despite spending all of the work’s fifth chapter decrying logical fallacies allegedly embedded in CRT, Feser embraces the genetic fallacy wholesale as he dismisses CRT because of its apparent postmodern and Marxist origins. Believing (rather than proving) that both postmodernism and Marxism have been overcome (or proven invalid, wrongheaded, stupid, silly, etc. by the course of history), Feser does not perceive how CRT can survive except as another dangerous ideology that threatens the milquetoast libertarian-esque political ordo with incense that has taken a shine to over the years. Maybe if Feser had only made a passing reference to postmodernism and Marxism as intellectual antecedents to CRT, he could be forgiven for only pointing out a fact of life rather than mounting an argument. Yet time and again he returns to this connection to “demonstrate” that CRT is no darn good.

As Feser runs through CRT’s logical fallacies (many of which are contained in Robin DiAngelo’s pop polemic White Fragility), he posits a series of conclusions that could be true absent their espousers’ racism, albeit with little in the way of proof. And so, when it comes to income disparities among certain races, are they the result of systemic or institutional racism or differences in culture? Are blacks charged and sentenced for allegedly committing crime at higher average rates than whites because of racism in the criminal justice system or is it because blacks are often raised in single-parent households with absentee fathers? Feser notes that suggesting cultural and familial differences as a cause for negative social outcomes is evidence of racism by CRT’s lights. This is a problem, not just because it is intellectually dishonest, but because it stifles open discussion. On this point, I agree with Feser. Where I am cautious is with respect to why Feser uses these conclusions as his examples. Is it because he believes they are correct? Does he think his audience will accept them as highly likely if not undeniably true? Finally, why does Feser not posit other conclusions, like the role class plays in these problems? Perhaps Feser worries that doing so would undermine his own political commitments.

Those commitments are on muted display in AOIC’s closing chapter, “Catholicism versus Critical Race Theory.” Here Feser again turns his sights against postmodernism and Marxism to discredit CRT. According to Feser, “the Church has consistently and strenuously condemned the key ideas of Marxism and all other forms of socialism and communism, along with relativist and other themes characteristic of postmodernism.” Feser does not say in detail what these “key ideas” are, nor like many contemporary Catholic critics of socialism does he bother to define what socialism is. Given that “socialism” today means everything from total state ownership of the means of production to food stamps, it is impossible to say that the Church has ever issued a full-throated condemnation for everything that passes for (or is accused of being) socialism. Feser quotes Pope Leo XIII’s Rerum Novarum (RN) approvingly on what it says against class conflict (more on that in a moment) but is silent on the principle of just wages or the topic of social safety nets, which are addressed throughout the Church’s modern social magisterium.

On the topic of class, Feser announces that “the Church has condemned the Marxist thesis that social classes, such as the rich and the poor or capital and labor, are inherently and necessarily hostile to one another.” According to RN as cited by Feser, this thesis “is abhorrent to reason and truth” because “nature has commanded…that the…classes mentioned should agree harmoniously and should form equally balanced counterparts to each other” (emphasis added). “Should” is not “do.” While Marxism of the strict observance is wrong to posit class hostility as an inevitability, neither Leo XIII nor any other pope ever taught that class conflict is empirically false. Without the establishment of a just social order, class conflict will likely persist; one need not be a Marxist to grasp that.

Feser’s class blindness coupled with his apparent acceptance of neoliberal economics leads him away from anything more than “cultural” conclusions concerning racial disparities. Even if cultural differences could explain differences in wealth, education, and crime rate, far more work needs to be done to address the development (or degeneration) of culture; its origins; and why certain cultures persist among certain populations and not others. Keep in mind that when it comes to immigration policy and foreigners, Feser appears fine with positing a unified American nation with a homogenous culture in need of safeguarding. As his eye turns inward, however, Feser sees numerous cultures, many of them bad, and many of them responsible to some degree for a plethora of social ills.

As stated at the outset of this post, AOIC is a mixed bag. The strength of its opening chapters is dampened by the intrusion of Feser’s personal policy preferences, backed up by a selective reading of Catholic social teaching. CRT’s flaws, of which there are many, are addressed, but regrettably in a manner that feeds into persistent conservative beliefs that either racism is not a genuine problem or the extent to which class exacerbates this problem. It is a shame Feser felt the need to package all of this in a book rather than a series of discrete blog posts. They would make it easier to separate the wheat from the chaff.