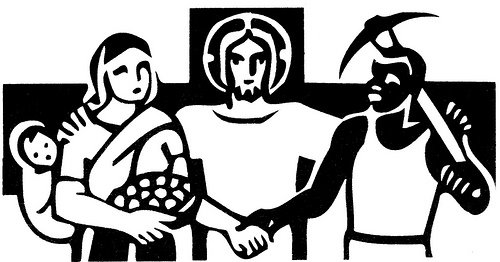 The kerfuffle over Andrew Strain’s recent First Things website article criticizing the idea of free markets is starting to die down despite the Acton Institute’s Joe Carter having a panic attack over the specter of socialism haunting ostensibly conservative Christian publications. Carter’s rebuke to Strain (and others) is nothing more than the same old, same old. Almost all forms of public regulation, by Carter’s lights, constitutes socialism. It’s not entirely clear where Carter draws the line, or if there is room in Carter’s liberal-economic outlook for measures like antitrust law, environmental protections, and labor standards. What rings strange in Carter’s ill-conceived attack is his insistence that Strain himself is a socialist for no other reason than the latter suggested that Pope Pius XI, author of the towering social encyclical Quadragesimo Anno, offers up alternatives to free-market capitalism. In a brief Twitter exchange with Carter, he made it known that Strain might consider reading later papal documents which condemn socialism. Carter is apparently ignorant of the fact that Pius XI, like his predecessors, condemned socialism outright and no Catholic thinker worth his salt has ever suspected Pius of harboring crypto-socialist ideas.

The real problem here is that Carter, like so many “Actonites,” subscribes to a Manichean worldview with the capitalists on one side (“Children of Light”) and the socialists (or communists) on the other (“Children of Darkness”). There can be no “third way,” nor apparently sensible regulation of the market. And by “sensible regulation” I mean nothing more than the sort proposed by some of Carter’s fellow, but far more learned, economic liberals. Consider, for instance, law professor Richard Epstein’s more balanced take on the market. While Epstein is a strong advocate for private law doing the heavy lifting of protecting rights and redressing wrongs, he has defended the use of antitrust law to prevent monopolization and other restraints on trade while leaving room open for some public regulation to address collective action problems and the tragedy of the commons. Although I remains skeptical of many of Epstein’s claims, not to mention his reliance on neoclassical economics, his consequentialist approach treats the market as an effective means of maximizing social welfare while not ignoring the market’s imperfections.

Beyond this, the crucial issue for Strain and other faithful Catholics (which excludes Carter) is what does the Church teach? For well more than a century, the Church’s social magisterium has set forth clear principles for the proper economic ordering of society. Although no pontiff has ever claimed to provide a sure-fire roadmap for how particular economies are organized, none have dismissed the fact that a just economy demands just wages for workers; social, moral, and religious protections; solidarity; and the application of the principle of subsidiarity. Although these principles are best upheld at the local level through intermediary institutions, some form of public regulation is expressly contemplated by the Church’s magisterium. Moreover, the Church has never been blind to the need for social safety nets for the least well off in society and that moderate taxation, rather than being a form of theft, is indispensable for maintaining public order and justice.

Granted, some Catholics in recent years have jumped the rails a bit on these measures, believing—wrongly—that what they find in the Church’s social magisterium is a mandate for highly centralized regulatory schemas, entitlements, and massive wealth transfers. Their errors, however, do not justify scrapping Catholic social teaching as a whole, nor setting aside what great pontiffs like Leo XIII, St. Pius X, and Pius XI taught. Sure, Pope Francis, with his penchant for off-the-cuff remarks and imprecise rhetoric, may have temporarily handed pro-socialist Catholics an apparent justification for their beliefs, but at the end of the day the timeless social principles of the Church—principles which cannot be squared with true socialism—remain to guide us up to the present day.