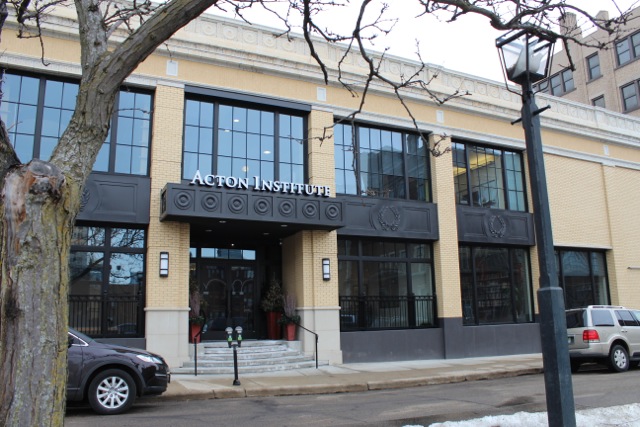 Archbishop Fulton Sheen is remembered for many things, but his thoughts on political economy are typically not among them. On the question of socialism and capitalism—a question which haunts (Western?) Catholics to this very day—this is what the Venerable one had to say in 1952: “Both capitalism and socialism are opposite sins against property. Capitalism emphasizes private rights to property without any social responsibility to the common good; socialism emphasizes the social use of property, to the forgetfulness of personal rights.” Although Sheen did not present a “theory” or a “model” of a well-ordered economy in detail, he did suggest that “[t]he… solution is one in which the rights to property are personal, but the responsibility is social.”

To get a fuller sense of what Sheen has in mind, it is necessary to go back to his February 7, 1943 address where, inter alia, he sets forth the following principle regarding wages: “[W]hen an industry is unable to pay a wage sufficient not only for a moderately comfortable life but also for savings, the difference should be made up either by industry pooling a percentage of all wages paid, or, in default of this, by the State.”

Sheen goes on—in the spirit of papal documents such as Pope St. Pius X’s Fin Dalla Prima Nostra and Pius XI’s Quadragesimo Anno—to argue for greater cooperation between capital and labor, noting that neither the right to profits on the one hand nor the right to organization (or unionization) on the other are absolute; both are subservient to the common good. Where Sheen may have fallen short is with regard to his belief that democracy is the best way to ensure that the rights of capital and labor are protected without infringing upon the common good. Although Sheen is right to note that historically political power was held in the hands of capital, his faith that greater democratization would provide labor with a greater balance of power did not come to fruition. Sheen did not anticipate the extent to which capital, through control of advertising, mass marketing, and social media, would be able to manipulate the voting direction of labor, leaving capital firmly in control.

At the same time, it does not appear that Sheen anticipated the extent to which capital would go to curry favor with Christianity, specifically Catholicism. In the United States today, the Acton Institute—which is run by and directed primarily toward Catholics—houses some of the leading Christian apologists for capitalism, specifically the “good” of the free market, unfettered rights to profits, and the conflation of the common good with material social-welfare gains. No doubt Sheen would be horrified to learn that an institute presided over by a Catholic priest would come out against minimum-wage laws, promoting so-called right-to-work legislation, and argue that a “just wage” is the prevailing market wage. To Acton, of course, this is a non-issue; Sheen was not an “economic scientist” in the way the denizens of the Cato and Mises institutes allegedly are. Sheen’s concerns, by Acton’s lights, are those of an ill-informed man relying on theological and doctrinal statements which, by virtue of their “unscientific” nature, can be left to the side by faithful Catholics.

As I mentioned in my previous post, many Catholics today, particularly in the United States, are fundamentally confused about what the Church actually teaches concerning political economy. A certain brand of youngish Catholics, rightly concerned with the ubiquity of capitalism, recently made a serious intellectual and moral misstep by believing that socialism (of a naively Marxist variety) will save them. Others have chosen to give up the fight altogether by aligning either with Actonite ideology or embracing, in one form of another, the emptyheaded economic nationalism trumpeted by the Trump Administration. There have of course been some nods here n’ there toward the poor, the underclass, the downtrodden, etc. all in the name of Pope Francis’s ostensible “papacy of mercy,” but much of that has come from the liberal wing of the Catholic Church, the same which believes that entitlement programs and centralized redistribution is all it takes for a country to align itself with the tenets of the Gospel.

Ultimately, it is hard to shake the notion—the fear—that Catholics today no less than Catholics in the previous decades have lost their sense of what being here is for. Material concerns are prioritized over spiritual ones, and “things economic” have replaced “things moral.” Granted, in an age of iPhones-for-all and incessant streaming services which banalize culture just as easily as they corrupt the intellect, there is little reason to be this dreadful state of affairs. It’s important to keep in mind that for a certain breed of Catholic between, say, 21-35, posturing on social media with indistinguishable microbrews and books they’ve barely read is an easy substitute for the hard work of restoring all things in Christ. Prayer has given way to pedestrian Tweeting and man’s final end is no longer Heaven, but the special kind of hell that is social recognition.