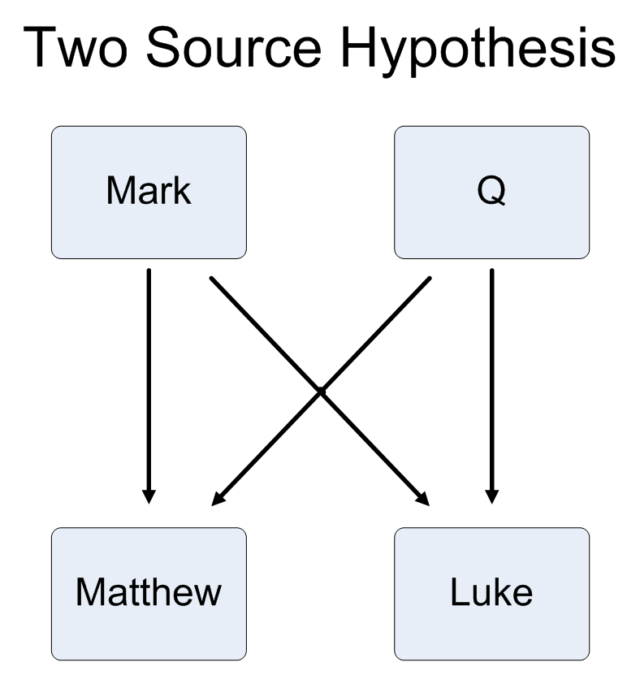 Accompanied by Q, that immaculate collection of our Lord’s sayings that so many “Biblical Christians” routinely ignore, a man could find his way through this life with nary a worry. For this uncontroversial text, attested to by a great cloud of witnesses for nearly 2,000 years, forms the cornerstone of Christianity. In fact, it is such a powerful collection that it is said at pulpits across the world that it, along with the Gospel of St. Mark, shaped the formation of Ss. Matthew and Luke’s gospels. No doubt this is why children are taught from the earliest age to appreciate the sweet science that is textual criticism, for without it the careless scribal errors of ages past may very well shape the souls of those living today. The horror.

Facetiousness aside (well, not entirely), nobody today contends that Catholics and Orthodox alike are woefully ignorant of the Bible. While some schoolchildren are fortunate enough to be handed cute songs and rhymes to assist them in remembering the titles of the Biblical texts, a vast majority of them will never read a single verse of Scripture outside of what may be contained in either their hand Missals or quoted in a “spiritually uplifting” book. When I come across a Protestant at one of West Michigan’s numerous Christian-themed coffee shops, I have to confess off the bat that they have bells n’ smells Christianity beat when it comes to the Bible just before reminding them that the existence of the Bible presupposes the Church which canonized it. Most folks, particularly young folks, aren’t terribly impressed by that, and for good reason. For if I or any other Catholic/Orthodox take such pride in the production of the Bible, why don’t we make a firmer effort to read it? Woe to us, I suppose.

One common justification for not reading the Bible that circulates among Catholics and Orthodox is that it is up to the Church to determine what Holy Writ means; reading it “alone” will only lead us to commit the Protestant of error of imposing our own subjective meaning on the text. Maybe. Again, given how many Protestants I have met who are sure of what Scripture means and yet offer up wildly disparate readings of the same pericopes does affirm, at a certain level, the reality that Scripture can be manipulated along a number of mutually exclusive lines. A Protestant rebuttal to this line of thinking is that if it is for the Church and the Church alone to interpret the Bible, why bother reading it at all? Why not simply look to what the Church has to say and leave the text of Scripture to the side? While this line of questioning is often intended to instill shame, more often than not it seems to bolster Catholics and Orthodox in holding that “ignorance [of the Bible] is bliss.”

What, I wonder, would become of Christianity were the Bible to be read and read often. Would there be less sin? Would there be a greater thrust to remake the world and evangelize those lost to heathenry? Might streaming television and video games go the way of the dodo as people spent their well-earned hours of leisure in heated but charitable discussions over the meaning of Job or why God would allow his most obstinate prophet, Jonah, to become His most successful one? Perhaps the only magazines and books to be produced would be Biblical commentaries, each one invested not so much in scoring polemical points or advancing careers, but rather disclosing the meaning of the single most important book (or, rather, collection of books) in human history? Maybe, under the guidance of the Word of God, a real effort would be made across the nations to restore all things in Christ. Or perhaps people would just find more reasons to despise, vilify, and ultimately murder one another—just like in the good old days.