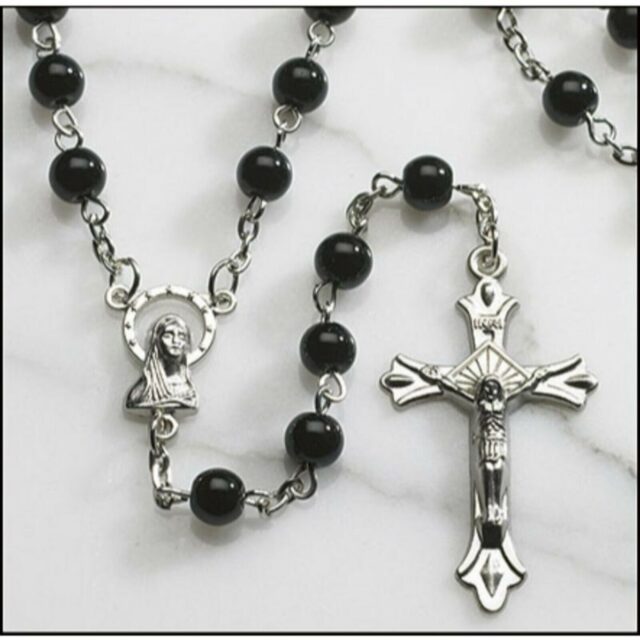 Much handwringing is underway over Daniel Penneton’s online piece at The Atlantic, “How Extremist Gun Culture Co-Opted the Rosary.” Having a sneaking suspicion that many of those decrying it have not read it, I would recommend they do so. In fact, I recommend anyone who is interested in contemporary American politics and Catholicism take a gander, not because Penneton gets it exactly right (he does not) nor because he exhibits knowledge of the rosary’s history (again, he does not), but because the phenomenon he touches upon is real: the degradation of an authentically spiritual devotion in the service of worldly politics.

Penneton stretches his thesis a tad too far by making direct links between “gun culture” (which is also real, by the way) and the rosary, though certainly there are those involved in the former who like to parade their beads around on social media as a weapon—and not a spiritual weapon. Martial imagery and metaphors have long accompanied the rosary devotion, though the war they pointed toward was a spiritual war against the devil, not a political war, especially a petty political war over the meaning of the Second Amendment or whether one can defend themselves in court as a “sovereign citizen.” This is not to say that there are not legitimate evils in society which at their root are spiritual. Such demons may only be driven out by prayer, repentance, and fasting; posting cringe-worthy selfies with the rosary-as-practical weapon wielded in the service of nothing accomplishes nothing.

Some are curious about the origins of the phenomenon Panneton points to. Online culture can be, well, weird and Catholics are no exception to weirdness, particularly when they embrace it on Twitter and other social-media fora. How that is supposed to attract or edify is beyond me, but it happens nonetheless. What also happens to an embarrassing degree are (mostly young) males, lacking a compass for their (self-)repressed masculinity, promoting the rosary like it’s an actual broadsword that should be run through the gullets of heretics, schismatics, feminists, leftists, Muslims, Jews, and so on and so forth. Some of these folks cling to (neo-)integralism, which loosely aligns with their trite medieval vision of a well-functioning political order. Most appear attracted to more secularized alt-right postures, though as I have discussed elsewhere, these pathologies are not necessarily incompatible with integralism.

It is important to bare in mind that these cyber crusaders are an extreme minority of all Catholics, including Catholics who pray the rosary regularly. Although exact studies are lacking, again it appears that the online “rosary wielders” are primarily angry young man, sometimes derided as “incels” or “edgelords” by their social-media peers, who are grasping for a stature they never had and likely never will. Instead of huffing burn pit fumes like actual military service members, they spew quasi-Tolkienite tripe while giving nods to a romanticized past where men were men; women knew their place; families had a dozen children; and society run on “traditional moral values.” Many of these persons will grow out of this phase. Some will not. And of course, some will dabble in more extreme (and practically dangerous) online cultures.

Traditional Latin Catholics, who are more variegated than Penneton recognizes, often shoulder the brunt of these criticisms, though the are hardly to blame. A well-formed traditional Catholic should be able to distinguish between the rosary as a powerful spiritual weapon and the rosary as a blunt cultural instrument of little value. A so-called rosary crusade for the good of the Church and society is laudable; paying for violence against one’s enemies, real or imagined, is not. For those critical of Catholicism, online cosplaying with rosaries and images of crusader helmets and other such nonsense only feeds into their narrative that Catholics are dangerous, demented, and disloyal to American democracy.