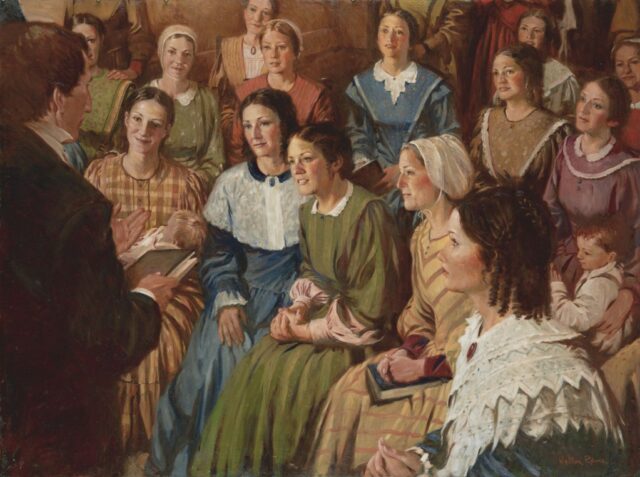 Hulu’s recent adaption of the John Krakauer true crime/religious history bestseller, Under The Banner of Heaven, generated mixed but overall positive reviews. Opting for a “poetically licensed” examination of the savage murders of Brenda and Erica Lafferty with flashbacks to Mormon history, the television series has come under fire from Mormon faithful. McKay Coppins, a staff writer at The Atlantic who adheres to some form of the Mormon religion, attacked the show for presenting the “idea…that Mormonism is at heart an oppressive and violent religion whose mainstream adherents are ever perched on the brink of radicalization[.]” Further, “the show has managed to offend or at least alienate most of the Latter-day Saints who have given it a chance, including the most sophisticated viewers.” According to Coppins, some unspecified element of his confession now looks at Mormon history with a critical eye. It stands to reason, however, that professing critics of the Mormon religion are few and far between; they do not represent the mainstream.

While Coppins has several complaints about Banner, one of them is exceedingly silly: Mormonism is a persecuted minority religion in America. Sure, there may only be approximately 7-8 million Mormons in America, which places their numbers well north of observant Muslims and Jews. And despite not being a Christian religion, Mormonism in America is six to seven times larger than Eastern Orthodox Christianity. Mormons continue to have a stronghold on Utah society and politics, and Mormon adherents can be found in all walks of political, social, and popular American life. Due to Mormon doctrinal plasticity on issues that have landed them in hot water, including polygamy and overt racism, they have been able to “get by” in the United States despite harbor an array of religious opinions that can be sourced to a charismatic 19th century charlatan named Joseph Smith.

Mormons may be nice people (many are) with a general moral code that broadly adheres to the shared views of many folks until recent times, but one of the unsettling elements of Krakauer’s book (and the Hulu series) is how central polygamy (or, to use the Mormon term, “plural marriage”) was to Mormonism at the outset and remains critical to the religion’s fundamentalist wing. (The mainline Mormon religious institution, the Church of Jesus Christ of Latter Day Saints (LDS), routinely denounces its estranged fundamentalist brethren as existing outside the LDS church.) Joseph Smith’s centrality to Mormonism has not waned in nearly two centuries. So why is it wrong for Krakauer or a plethora of other writers, scholars, and polemicists to peer into Mormonism’s history to expose not merely that plural marriage was practiced, but was actively promoted as essential for salvation? The LDS church may find all this embarrassing, but it is not wrong.

There is an argument to be made, of course, that fundamentalist Mormons are simply staying true to historic Mormonism, the sort which was allegedly revealed by God to Smith and later prophets before becoming politically inconvenient. Moreover, when following the thread of strict Mormonism to its logically illogical and perverse conclusions, is it surprising to find plural marriage, pedophilia, rape, spousal abuse, and incest running rampant in fundamentalist circles? Whatever good came out of the mainline LDS church condemning these practices does not wash over that it shares a common history with the more extreme or, should I say, strictly observant branches of the religion. The fundamentalists await one “strong and mighty” to restore pure Mormonism. The LDS, for its part, have never produced anyone “strong and mighty” enough to suppress those who represent an arguably more authentic form of Mormon belief.