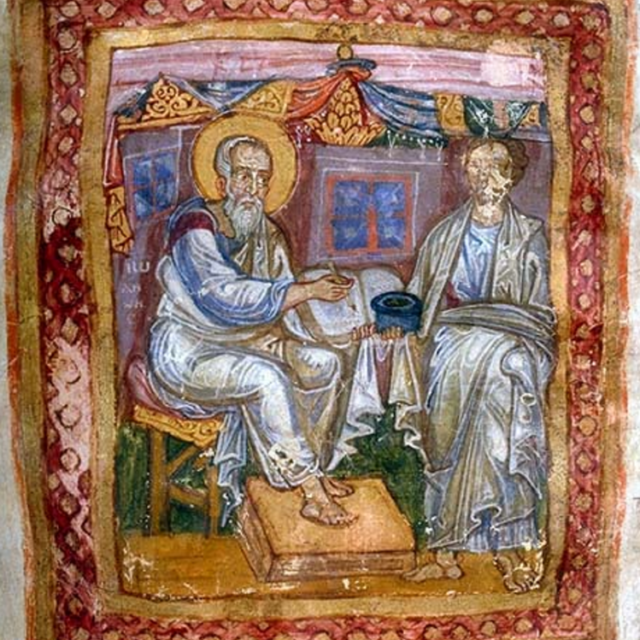 Far be it for me to get too embroiled in one of many online fisticuffs over the works of David Bentley Hart, the recent fallout over Tradition and Apocalypse is as baffling as it is ridiculous. Tradition, which at its core is a critique of Cardinal Newman’s Essay on the Development of Doctrine, also features what I have elsewhere dubbed an “iconoclastic critical-historical reading of the Fall narrative.” This, along with some of Hart’s earlier remarks on various Old Testament lessons, has prompted some mental midgets to accuse Hart of—wait for it…—Marcionism!

Marcionism, in the popular polemical lexicon, is an empty-headed rejection of the Old Testament (Hebrew Scriptures) that was vanquished successfully in the early centuries of Christianity. Marcion of Sinope, that deeply religious man who promoted what he believed to be the authentic Gospel of Jesus Christ as found in a large portion of the Pauline corpus and an edited version of St. Luke’s Gospel, is the ancient villain; his contemporary disciple is apparently Hart. Others who are either accidentally or intentionally ignorant of the Old Testament are sometimes accused of Marcionism as well. Indeed, I have heard at least one Orthodox cleric chide his co-religionists for being de facto Marcionites. Perhaps he has a point, though what I think this priest is actually lamenting has less to do with an ancient heresy and more to do with general ignorance of the Scriptures.

The problem with accusing Hart or almost anyone of Marcionism, particularly when the concern is that a person either rejects the Old Testament or, in reading it, submits it to a critical-historical interpretation, is that it ignores Marcion’s own views. Marcion did not deny the historicity of the Old Testament; he believed it to be literally true. In his groundbreaking monograph Marcion: The Gospel of the Alien God, Adolf von Harnack goes to great lengths to demonstrate the degree to which Marcion took the Old Testament books seriously with nary a thought given to the possibility that they were distorted through alterations and interpolations as Marcion believed much of the New Testament had been. Moreover, Harnack also reveals that despite his low view of the judgmental “creator-god” of the Old Testament and his inferiority to the merciful “alien-god” of the New, the Old Testament remained a source of instruction.

Hart, by his own lights at least, falls into the orthodox Christian exegetical tradition where allegory and typology can have their say. These abominable interpretive twins were anathema to Marcion. Equally critical is the fact that Hart has never posited two deities, and despite accepting the findings of critical-historical scholarship concerning the origins of certain Old Testament narratives, he makes clear in Tradition that these stories are not without theological value. If anything, Hart appears much more interested in where these narratives, regardless of their “empirical” origins, fit within the story of salvation history rather than casting them aside as irrelevant myths that need not occupy serious Christians.

It is all but impossible to be a Marcionite in any legitimate sense without accepting Marcion’s unqualified belief that the creator-god of the Old Testament is not the alien-god of the New, that is, the merciful and loving Father of Jesus Christ. Although there will always be limits to what we can confidently believe about Marcion’s true thoughts, enough remnants of his intellectual work remain in the extant writings of his most rabid theological opponents for us to be sure that Marcionism had nothing to do with a radical rejection of the Hebrew Scriptures.

Some might opine that this is all beside the point. Hart is dangerous, unorthodox, misleading, corrupting, vile, and so on and so forth; it matters not if he is truly a Marcionite. Maybe. If Hart were a Marcionite, presumably he would stay in line with the movement’s namesake by telling all with ears to hear about the higher alien-god of the New Testament, the one who remained hidden from human history until he revealed himself exclusively through the Gospel preached by St. Paul and kept, following some precise excisions and emendations, in Luke. A rhetoric of love, mercy, and peace would likely flow from Hart’s fingertips, not vitriolic dismissals carrying enough scorn to make the creator-god blush.

Hart, like most of his followers and critics, remains thoroughly Christian, however.